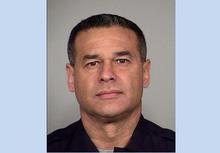 Two police officers have been shot in separate incidents in what authorities are calling targeted attacks. One died; the other was shot twice in the face but was expected to survive.

They were two of four officers shot Sunday in four incidents.

A San Antonio detective writing out a traffic ticket to a motorist was shot to death in his squad car late Sunday morning outside police headquarters by another driver who pulled up from behind, authorities said.

Sunday evening, police posted a picture of a person they said they were hoping to identify in connection with the case. Police also released video of the person via their Facebook page on Monday, calling him a suspect and showing him apparently entering the public safety headquarters.