by The National Law Review 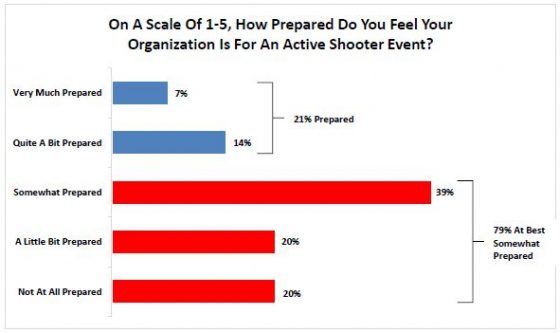 Between 2014 and 2015, the United States experienced nearly six times as many active shooter incidents as it did between 2000 and 2001, according to the FBI. The report, Active Shooter Preparedness by Everbridge, found that even though U.S. companies are overwhelmingly concerned about violence and violent acts in the workplace, they remain unprepared.

Preparedness is important, as companies cannot rely solely on police and other government assistance. According to an FBI study of active shooter events between 2000 and 2013, 60% ended before the police arrived. Adequate preparedness requires communication and practice plans to make sure responders know who is at risk and that people know what to do if an event happens.

Despite this, close to 40% of respondents said they did not have a communications plan in place for active shooter events.

The survey also found that executives of organizations are much more concerned about employee or student safety than they were two years ago—the overwhelming majority (79%) said they were.