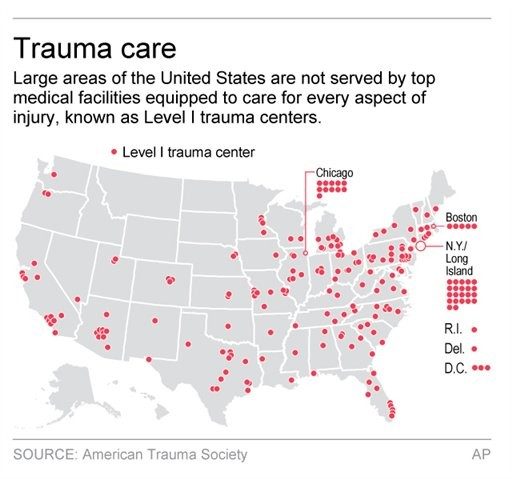 Up to 1 in 5 people may be dying unnecessarily from car crashes, gunshots or other injuries, a stark conclusion from government advisers who say where you live shouldn't determine if you survive. The findings take on new urgency amid the increasing threat of mass casualties like the massacre in Orlando.

The Orlando shooting happened just blocks from a major trauma care hospital, an accident of geography that undoubtedly saved lives. But Friday's call to action found that swaths of the country don't have fast access to top care, and it urges establishing a national system that puts the military's battlefield expertise to work at home.

The ultimate goal: Zero preventable deaths after injury, and minimizing disability among survivors, said the National Academies of Sciences, Engineering and Medicine report.

Because no one organization is in charge of trauma care in America, the high-ranking advisers called on the White House to lead the effort, but they also said local and state improvements could begin immediately.

"The meter is running on these preventable deaths," said Dr. Donald Berwick of the Institute for Healthcare Improvement, who chaired the NAS committee.

Trauma is the leading cause of death for Americans 45 and younger, killing nearly 148,000 people in 2014 alone and costing an estimated $670 billion in medical expenses and lost productivity.

The report found a patchwork of results, from emergency medical systems — the often-volunteer first responders — that are considered more as transporters than health providers, to death rates that vary twofold between the best- and worst-performing trauma centers.