Skip to main content
Home > Articles > Battle Tested: Ketamine Proves its Worth on the Front Lines 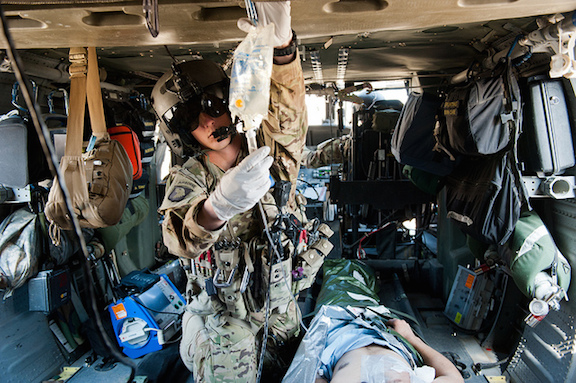 Ketamine’s use in the ED as a sedating agent is well established. However, ketamine use as an analgesic agent, rather than anesthetic agent, dates back to the early 1970s, when ketamine was first introduced [15]. Over the past decade, ketamine has been used as an analgesic by US Special Forces and coalition forces in the combined Iraq and Afghanistan campaigns. The need for an effective, safe, easily administered, battlefield analgesic has made ketamine a preferred agent in the combat and austere environment. Ketamine analgesia has been pushed even further forward into the hands of combat medics in the austere environment. Within just a few years, the proven safety and efficacy of ketamine has resulted in its use military-wide.

Current TCCC guidelines recommend a starting dose of 50mg IM/IN or 20mg IV/IO slow push. Most of the previous literature on its use an analgesic agent have ranged from 0.25-0.5mg/kg of ideal body weight slow push. Anecdotally, most of the untoward events (euphoria, hallucinations, etc.) appear to be infusion rate-dependent. An easy way to avoid some of the rate-dependent side-effects is to put the desired dose of ketamine into a small bag of saline and bolus it over several minutes.

The ideal analgesic agent provides adequate pain relief with a safe therapeutic margin in a wide-variety of patients. Ketamine has been safely used in all ages- from the young pediatric population to the critically-ill elderly patient [1,2]. Inadvertent overdoses of up to 100-fold the intended dose have been documented without sequelae [3].