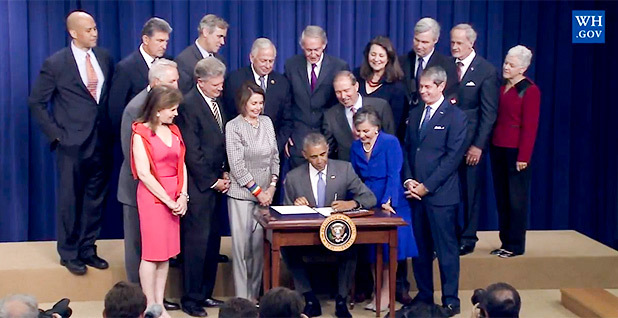 President Obama signed into law the first overhaul to the nation's chemical laws in nearly 40 years, a milestone in the history of environmental legislation and a feather in the caps of Democrats and Republicans alike.

"Most Americans would expect that we could come together to fix this law and do a better job of protecting the American people," Obama said at the signing ceremony in the Eisenhower Executive Office Building. "Well, here's the good news: That's exactly why we're here today."

Introduced last year by Rep. John Shimkus (R-Ill.) and Sen. Tom Udall (D-N.M.), H.R. 2576 was named the "Frank R. Lautenberg Chemical Safety for the 21st Century Act" to honor the late New Jersey senator who spearheaded reform efforts for several years before his death in 2013. The original legislation, the Toxic Substances Control Act, was signed into law by President Ford in 1976.

The law gives U.S. EPA new authority to review and regulate chemicals, along with mandating that the agency update its inventory of existing chemicals and create a risk evaluation process -- all within six months from today.

Obama recognized the legislative work it took to get TSCA reform to his desk.

"This has been years in the making. You don't get all these people in the same room without a few late nights on Capitol Hill," he said of the many members of Congress who shared the stage with him in the Eisenhower building's South Court Auditorium.