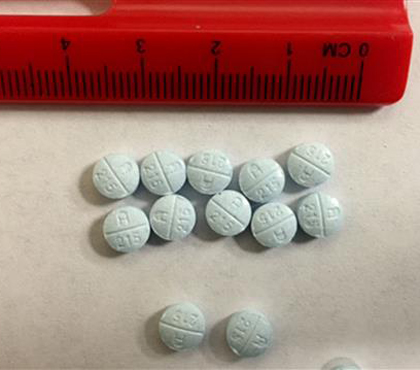 Fentanyl, the powerful painkiller more than 50 times stronger than heroin, has become so prevalent that the Drug Enforcement Administration is warning police and first-responders not to touch or field-test drugs they suspect contain it.

Calling fentanyl an "unprecedented threat," the DEA released a video to all law enforcement agencies nationwide about the dangers of improperly handling the drug and its deadly consequences -- especially to drug-sniffing police dogs.

"Fentanyl is being sold as heroin in virtually every corner of our country," said acting Deputy Administrator Jack Riley. "A very small amount ingested, or absorbed through your skin, can kill you."

Riley urged police to skip testing on the scene.

"Don't field test it in your car, or on the street, or take it back to the office," Riley said in the video. "Transport it directly to a laboratory, where it can be safely handled and tested."

Boynton Beach Police Chief Jeffrey Katz said the DEA warning was "quite scary, but not something we've been blind to."

"Anytime you have a substance that's cooked up in people's garages and labs, you never know what's in it," Katz said. "Every recipe is different."

There seems to be no lull in efforts to invent increasingly more potent -- and lethal -- drugs, Katz said. That means more overdoses and higher risks for police, too. In one recent overdose, the drugs were so powerful that it took ten times the normal dose of naloxone, also known as Narcan, to revive the addict, Katz said.