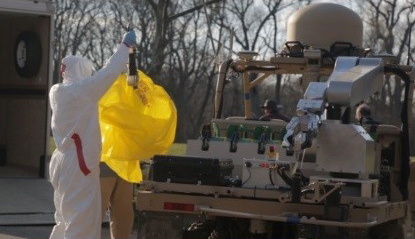 Recently, the Domestic Nuclear Detection Office (DNDO) helped plan and conduct an exercise of the United States’ capability to collect radioactive evidence in the immediate aftermath of a nuclear detonation. The exercise scenario included the detonation of an Improvised Nuclear Device in an urban setting. In a real event, the evidence collected helps identify the source of the device and those responsible for its use.

The exercise, Prominent Hunt 16-1, took place near Philadelphia and involved extensive collaboration among federal and local partners, including the Philadelphia Police Department and the Federal Bureau of Investigation (FBI) Philadelphia Field Office.

Members of the U.S. Government National Technical Nuclear Forensics Ground Collection Task Force deployed to the site of the mock detonation and collected samples of the simulated nuclear debris for analysis at designated National Laboratories. The Task Force is an interagency group made up of specialists from the Department of Defense’s 20th Chemical, Biological, Radiological, Nuclear, Explosives Command; the Air Force Technical Applications Center; the Department of Energy; and the FBI.