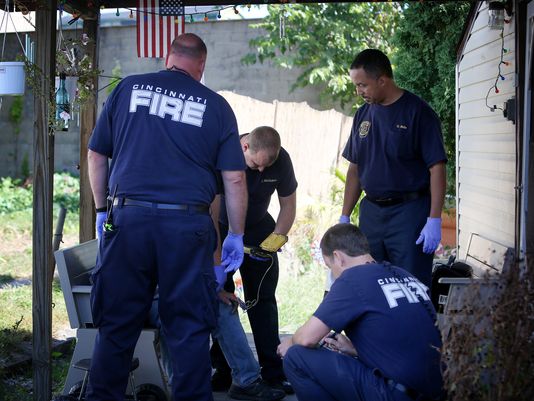 For six hours on a bright October afternoon in Northside last week, the firefighters at Fire Station No. 20 caught a break. They handled the stuff that most people can imagine filling the day of a first responder: a guy having trouble breathing, a fire alarm at the Chase School, an unattended bag left on Lingo Street.

But on that afternoon, the Station 20 team dodged the demon afflicting the Cincinnati region: They did not go on a single run for someone who overdosed on heroin. That, they said, was a fluke, a respite from the miserable task of bringing people who have used drugs back from the edge of death again and again.

“Heroin is part of the job now,” said Fire Department Capt. Mike Monahan. “You do get numb to it. When we show up some place, I think people expect us to be excited or wound up. But that’s because they’re excited. Besides, you don’t want us to come shouting. We’ve got work to do. It’s only later on, when you think about it, you say, 'well, that was kind of messed up.' ”

Across the region, drug overdoses now are a growing fraction of emergency runs. The years-long struggle spiked to a summer crisis with an influx of heroin laced with the elephant sedative carfentanil, which is deadly in humans. Between July 15 and Sept. 15, Hamilton County counted more than 1,000 drug overdoses.

In the late 19th century, Northside was once such a rowdy slice of Cincinnati that it was called Helltown. Three years ago, the Christian Moerlein Brewing Co. christened a new brown ale with Northside’s nickname. Firefighters, paramedics and emergency medical personnel reporting out of Station 20 call themselves the Helltown Devils.

Northside has not escaped the heroin epidemic. At Station 20, the first responders riding Engine 20 administered the heroin-overdose antidote naloxone 51 times between July and September – more than twice the instances in the same period in 2015.