by The Topeka Capital Journal 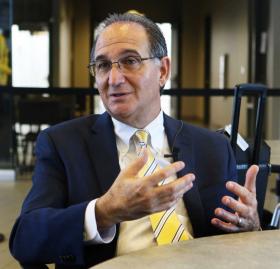 At first, the man appears drunk.

He’s walking along an on-ramp from Lackman Road onto Interstate 435, a major highway snaking through the Kansas City metro area. At 1 p.m., traffic is heavy.

The man doesn’t react well when a police officer arrives.

“He takes a few swings at the officer. They’re obviously not a Mike Tyson swing, but they’re swings nonetheless, where if something happened right there it could very easily spill over from the shoulder onto the highway where somebody would really get hurt,” Lenexa police Capt. Wade Borchers said, recounting an incident from earlier this year that involved another officer.

But no highway brawl breaks out. Instead, the officer just talks with the man. He calms down and the officer is able to get him off the road. Then he handcuffs him.

The difference between what could have happened and what did happen rests in the officer’s training, Borchers explained. The officer was able to recognize the man was not actually drunk but instead had a developmental disability, he said.

The story Borchers told serves as just one example of countless police interactions throughout Kansas that have been shaped by training focused on situations involving people with mental illness and developmental disabilities. Law enforcement agencies are attempting to pay greater attention to how they interact with people with mental health issues, though what that looks like can differ sharply among departments.

In particular, police approaches to mental illness exist along an urban-rural divide within the state. Large and midsize cities in Kansas have access to greater resources, while law enforcement in small towns and rural areas must grapple with limited resources and simple geography: Vast expanses of land often separate police from mental health professionals.