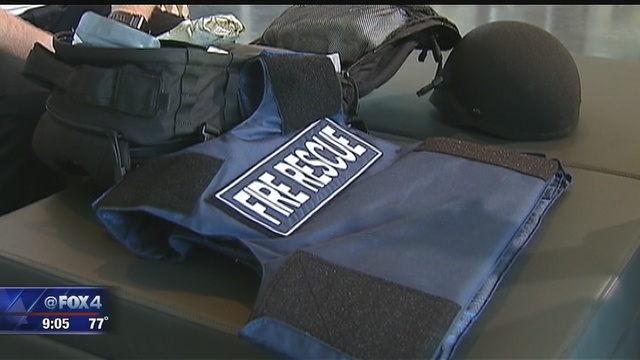 Dallas Fire-Rescue has purchased ballistic gear for firefighters and it’s working on an active shooter policy alongside the Dallas Police Department.

There are at least six departments that have bought gear or are in the process of making the purchase. DFR confirms it purchased the gear, but isn’t saying specifically what kind.

Firefighters in Fort Worth have had bulletproof vests and helmets for a year now. They wore their gear about a week ago when responding to a shooting in which two Fort Worth police officers were shot.

A fire department spokesperson says the department has enough ballistic vests and helmets for every on-duty firefighter.

The city of Fort Worth moved to what it calls a “rescue task force model” two years ago to better respond to active threat incidents. That’s when the gear was purchased through a Homeland Security grant.

Firefighters then went through training with the equipment alongside Fort Worth police officers and paramedics.

Firefighters started using the gear a year ago.

A spokesperson says it’s up to each firefighter as to when he or she wants to wear the gear, but it is intended for use in a warm zone where there is danger, but not an imminent threat.

Fort Worth firefighters can also carry kits in those situations with materials to help those who are wounded.