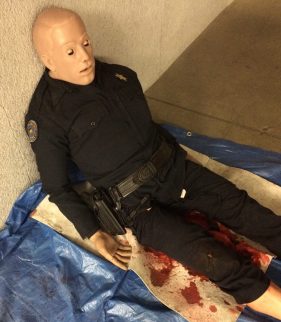 Active shooter and violent incidents require quick responses from law enforcement officers to end the threat. The increased frequency of active shooters or violent attacks by organized groups and the rise of lone wolf attacks have placed increased violent crime response and physiological stressors onto police officers.1 These violent attacks and chaotic scenes often result in multiple critically injured persons and mass casualties. Over time, active shooter response has evolved from various police responses such as the formation of active shooter response teams and diamond formations to the current practice of immediate response by individual officers as they arrive on the scene.

Active shooter incidents often result in human casualties among civilians, police officers, or both, and injuries on the scene often involve life-threatening trauma and blood loss. With incidents such as those in San Bernardino, California; Orlando, Florida; Dallas, Texas; Paris, France; Brussels, Belgium; and other mass casualty attacks, the need for first responders to provide immediate lifesaving measures to stop hemorrhaging and save lives of injured officers and citizens is paramount.2

Fire or emergency medical services (EMS) personnel often cannot enter the incident scene until the situation is deemed safe, which means law enforcement often encounter victims first and might need to perform emergency medical lifesaving procedures in dangerous situations. Police officers cannot call for fire teams on the radio and wait for help to save a victim from critical and life-threatening hemorrhaging. Medical response, even in urban areas, usually takes several minutes to arrive and start patient care, and, as stated, this response cannot occur until the situation is deemed safe. Law enforcement has traditionally received basic medical training in areas such as CPR, application of direct pressure, and the Heimlich maneuver—and, in recent years, the introduction and staging of medical equipment such as defibrillators has been critical to saving lives while awaiting medical personnel. In addition, reported use of tourniquet intervention has relayed success rates of over 80 percent, with officers requesting additional training in this area.3 Research on tactical medical skills and treatment priorities has also been requested.4

There is an increasing effort across the United States for law enforcement to work jointly with fire and EMS partners on lifesaving response measures such as medical teams who make entry into “warm zones” for medical care. Nonetheless, law enforcement must perform at least some immediate emergency trauma medicine during these violent attacks until EMS partners or fire personnel can arrive. Law enforcement’s success in these situations is dependent on access to basic trauma medical equipment, such as tourniquets. The application of tourniquets have been widely successful in military operations, and the use of tourniquets was reported to save lives in recent high-profile mass casualty events such as the Orlando shooting and the Boston Marathon bombing. In addition to access to equipment such as tourniquets, training is crucial in the arena of medical intervention; luckily, the amount of training necessary to apply a tourniquet properly can be accomplished in a very short time. In addition, while standardized training is certainly needed, the use of tourniquets in pre-hospital applications poses minimal risks of limb complications.5