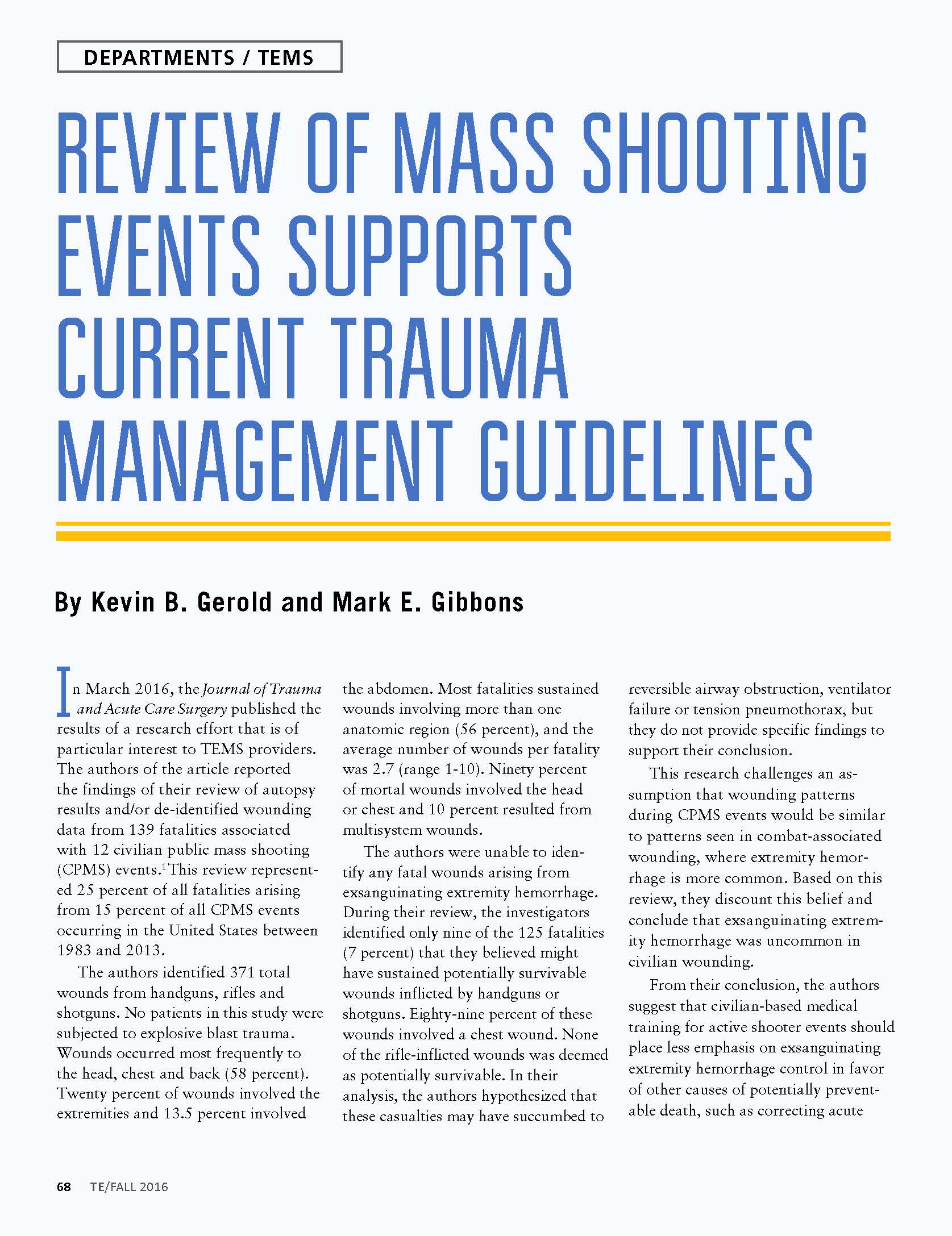 In March 2016, the Journal of Trauma and Acute Care Surgery published the results of a research effort that is of particular interest to TEMS providers. The authors of the article reported the findings of their review of autopsy results and/or de-identified wounding data from 139 fatalities associated with 12 civilian public mass shooting (CPMS) events. This review represented 25 percent of all fatalities arising from 15 percent of all CPMS events occurring in the United States between 1983 and 2013.

The authors identified 371 total wounds from handguns, rifles and shotguns. No patients in this study were subjected to explosive blast trauma. Wounds occurred most frequently to the head, chest and back (58 percent). Twenty percent of wounds involved the extremities and 13.5 percent involved the abdomen. Most fatalities sustained wounds involving more than one anatomic region (56 percent), and the average number of wounds per fatality was 2.7 (range 1-10). Ninety percent of mortal wounds involved the head or chest and 10 percent resulted from multisystem wounds.

The authors were unable to identify any fatal wounds arising from exsanguinating extremity hemorrhage. During their review, the investigators identified only nine of the 125 fatalities (7 percent) that they believed might have sustained potentially survivable wounds inflicted by handguns or shotguns. Eighty-nine percent of these wounds involved a chest wound. None of the rifle-inflicted wounds was deemed as potentially survivable. In their analysis, the authors hypothesized that these casualties may have succumbed to reversible airway obstruction, ventilator failure or tension pneumothorax, but they do not provide specific findings to support their conclusion. This research challenges an assumption that wounding patterns during CPMS events would be similar to patterns seen in combat-associated wounding, where extremity hemorrhage is more common. Based on this review, they discount this belief and conclude that exsanguinating extremity hemorrhage was uncommon in civilian wounding.

From their conclusion, the authors suggest that civilian-based medical training for active shooter events should place less emphasis on exsanguinating extremity hemorrhage control in favor of other causes of potentially preventable death, such as correcting acute airway obstruction and correcting acute respiratory insufficiency.

While the authors acknowledge that autopsy data and the absence of wounding patterns among survivors limit what conclusions can be made about the incidence of potentially survivable wounds and the effectiveness of immediate medical interventions, there are several important issues raised by this research.