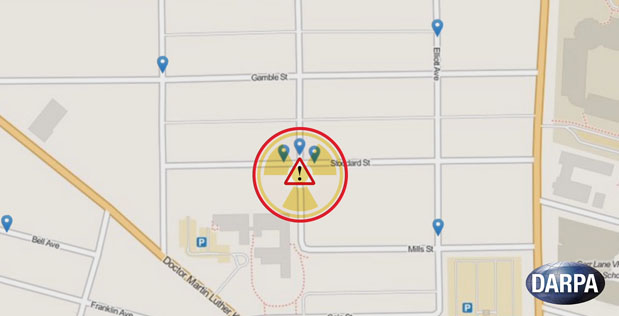 A DARPA program aimed at preventing attacks involving radiological “dirty bombs” and other nuclear threats has successfully developed and demonstrated a network of smartphone-sized mobile devices that can detect the tiniest traces of radioactive materials. Combined with larger detectors along major roadways, bridges, other fixed infrastructure, and in vehicles, the new networked devices promise significantly enhanced awareness of radiation sources and greater advance warning of possible threats.

The demonstration of efficacy earlier this year was part of DARPA’s SIGMA program, launched in 2014 with the goal of creating a cost-effective, continuous radiation-monitoring network able to cover a large city or region. Although radiation detectors have in recent years been installed in a number of key locations in the United States and around the world, the SIGMA program has sought to increase capabilities while lowering their costs, in order to network an unprecedented number of advanced detectors and provide a comprehensive, dynamic, and automated overview of the radiological environment.

The demonstration was conducted at one of the Port Authority of New York and New Jersey’s major transportation hubs where DARPA tested more than 100 networked SIGMA sensors. During the month-long test, the system provided more than a 100-fold increase in ability to locate and identify sources of radiation as compared to currently installed systems. All sources of radiation that SIGMA sensors identified were non-threatening, but the system proved how it could pinpoint the location and intensity of a source and specify, in each case, the type of radiation to which it was alerting authorities.