Skip to main content
Home > Articles > When Disaster Strikes in the US, the National Disaster Medical System Responds 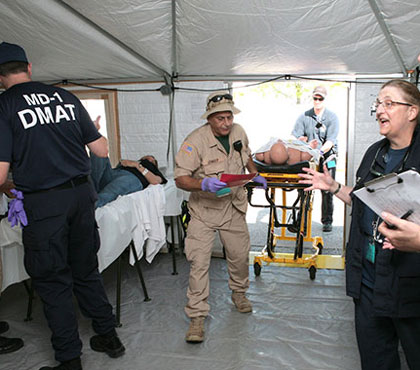 After Hurricane Katrina hammered the southeastern United States in 2005 and turned New Orleans into a vast, disaster area, the city of roughly 460,000 was largely dysfunctional. Once out of the threatened area, the next priority was treating the sick, wounded and injured.

The 2010 earthquake that rocked the nation of Haiti left 2.3 million people homeless, destroyed an entire nation and caused massive catastrophic damage and injures, including an estimate 200,000 dead. The extent of the injuries was horrific and required an expertise that was beyond the Haitian government’s capabilities.

National Disaster Medical System
The NDMS “is a federally coordinated system that augments the nation’s medical response capability.” The idea was originally formed during the Cold War, to respond in case of catastrophic casualties. Since then, NDMS has retooled and primarily assists state and local agencies dealing with medical care during major disasters.

Their mission is supported by the military and the Department of Veterans Affairs (VA) medical systems. Upon request, NDMS also will deploy to a foreign country to assist that government, as it did in Haiti and other locations around the world, to address major medical disasters.

This 6,000 person civilian force is always “on call” according to Murad Raheem — also known as “Mojo.” Raheem is the regional emergency coordinator for the Office of the Assistant Secretary for Preparedness and Response (ASPR) for Region II, which covers New York, New Jersey, Puerto Rico and U.S. Virgin Islands.

“The NDMS system is always ready and has teams pre-positioned and is able to respond anywhere within 12 hours of a request — similar to the way the National Guard responds when called out,” Raheem said.

The teams will respond to disasters, major special events, like the Inauguration and Super Bowl, and support any state or local entity needing increased medical support. To mobilize these resources during an emergency, a state will ask the Federal Emergency Management Agency (FEMA) for a disaster declaration which includes medical assistance. FEMA then tasks HHS to fulfill that request and they mobilize a federal force that can cover all the medical assets and care one could think of in a tragedy from A to Z.